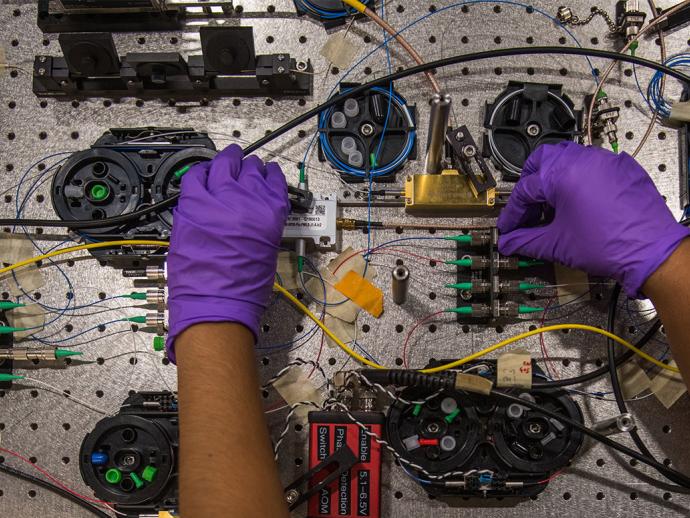 Scientists think it will be especially useful for problems involving many variables, such as financial risk analysis, data encryption, and studying the properties of materials.

Researchers doubt that humans will have quantum computers any time soon. Instead, they will be installed in educational institutions and private companies where they can be accessed through a cloud service.

How does the quantum internet work?

Quantum computers use basic units of information similar to the bits used in a classical computer. These are called “qubits.”

For example, one quantum state that can be used to encode information is a property called “spin,” which is the internal angular momentum of an electron. Spin can be thought of as a small compass needle pointing up or down. Researchers can use that needle to inject information into the electrons themselves, just as they would with regular particles—but this time, the information is encoded in a combination of potential states. Qubits are neither 0 nor 1, but rather both and neither, in a quantum phenomenon called superposition.

This allows quantum computers to process information in a completely different way than their conventional counterparts, so they can solve certain types of problems that would take even supercomputers decades to complete. These are problems like calculating large numbers or solving complex equations (see the traveling salesman problem). Quantum computers could be particularly useful in cryptography and discovering new types of pharmaceuticals or new materials for solar cells, batteries, or other technologies.

But to unlock that power, a quantum computer must be able to process large numbers of qubits—more than any single machine can currently handle. That is, unless several quantum computers could be connected through a quantum internet and their collective power combined, they would create a very capable system.

There are several different types of qubits in development, and each comes with different advantages and disadvantages. The most commonly studied qubits today are quantum dots, ion traps, superconducting circuits, and defect spin qubits.

What can the quantum internet do?

Like most scientific advances, we won’t understand everything the quantum internet can do until it’s fully developed.

Due to the unique properties of qubits, scientists think that the quantum internet will greatly improve the security of information, making it almost impossible for encrypted quantum messages to be intercepted and deciphered. Quantum key distribution, or QKD, is a process where two parties share a cryptographic key over an unblockable quantum network. Many private companies already offer this system, and it has even been used to secure national elections.

At the same time, quantum computers are vulnerable to conventional encrypted communications. RSA, the current standard for protecting sensitive digital information, is nearly impossible for modern computers to break; however, quantum computers with enough processing power can break RSA encryption in a matter of minutes or seconds.

A fully realized quantum network can greatly improve the accuracy of scientific instruments used to study certain phenomena. The impact of such a network could be wide-ranging, but early interest has focused on gravitational waves from black holes, microscopy, and electromagnetic imaging.

Creating a purely quantum internet will relieve the need for quantum information in the transition between classical and quantum systems, which is a major obstacle in current systems. Instead, it would allow a set of individual quantum computers to process information as a single conglomerate machine, giving them far greater collective power than any single system could command on its own.

“The quantum internet represents a paradigm shift in how we think about secure global communication,” said David Awschalom, Liew Family Professor of Molecular Engineering and Physics at the University of Chicago, director of the Chicago Quantum Exchange, and director of Q-NEXT . , Energy Department of the Quantum Information Science Center at Argonne. “Being able to create a network of quantum computers will allow us to send immutable encrypted messages, keep technology perfectly consistent over long distances using quantum clocks, and solve complex problems that a single quantum computer can handle alone – and those are just some of the applications.” that we currently know about. The future may hold surprising and impactful discoveries using quantum networks.”

How far is the quantum internet?

So far, no one has successfully managed to create a sustainable quantum network on a large scale, but there has been great progress.

In 2017 researchers at the University of Science and Technology of China used lasers to successfully transmit entangled photons between a satellite in orbit and substations more than 700 miles below. Experiments have shown that it is possible to use satellites to form part of a quantum network, but the system was able to return one photon in every 6 million—too few to be used for reliable communication.