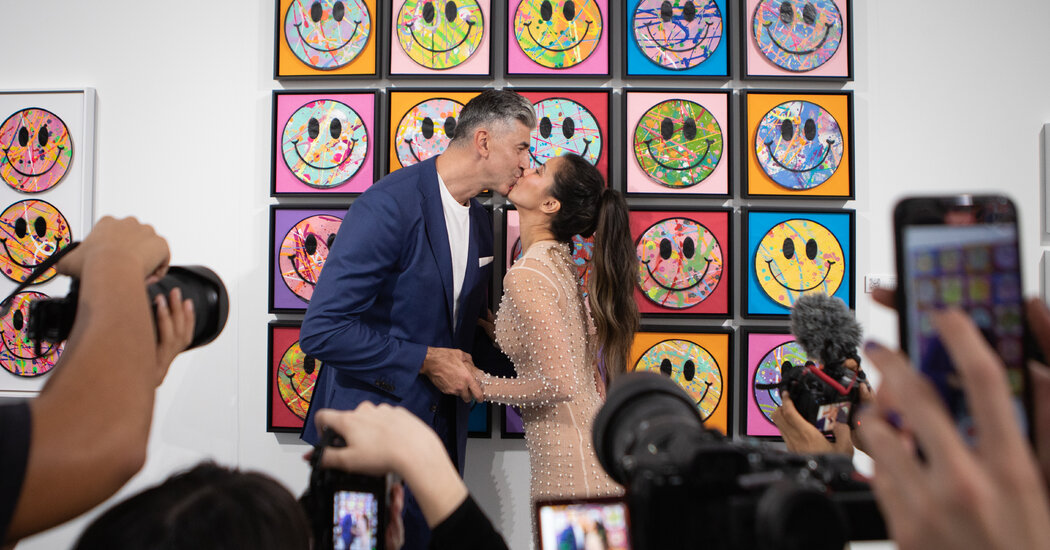 Like many couples before them, Constance Kelly Daniels and Emir Muhovic met in a bar. But they chose very different paths to get there.

Ms. Daniels, whose name is Kelly, was born and raised in Panama City, Florida.

Mr. Muhovic ran away from home in war-torn Bosnia in 1992 when he was just 15 years old. After spending some time in Germany, he immigrated to the United States in 2001.

Flash forward to a memorable night in August 2011 at a bar in Atlanta. Ms. Daniels, now 38, found Muhovic, 45, handsome, so she approached him. “I told her bluntly, ‘I’m not trying to be disrespectful, but I have a girlfriend,’ said Mr Muhovic.

“When he said that, I just said ‘anything’ and tried to be cute on the dance floor,” Ms Daniels said with a laugh.

The meeting made an impression on both of them. When they ran into each other again later that year, Mr. Muhovic said he was now single.

“He remembered me,” Mrs. Daniels said. “He asked for my number and I refused this time.” Mr. Muhovic sent a direct message to Ms. Daniels on Facebook a few days later and they began contacting each other.

On May 4, 2011, they went on their first date at the now-defunct Carpe Diem restaurant in Decatur, Georgia. They sat for hours sharing appetizers and talking about their lives. A few days later, they met on a second date, and the next day on a third date. Since then, they have not been apart for more than a few days.

Yet they hesitated to name their relationship for the first year: it wasn’t until they attended a party with friends on Lake Lanier, outside of Atlanta, that things changed when Mrs. Daniels heard a rumor circulating.

“My friend came up to me and said, ‘The emir tells everyone how much he loves you.’ So I ran over there and shouted ‘I love you’ to him,” Ms Daniels said. “And the rest is history.”

Ms. Daniels holds a BA in Architecture from Florida A&M University in Tallahassee. She moved to Atlanta in 2010 to work at Cooper Carry, an architectural firm with offices in Atlanta. She is now a full-time artist and furniture manufacturer under her own brand Cosmic Creativ.

Mr. Muhovic graduated from Binghamton University in New York with a bachelor’s degree in biochemistry. He moved to Atlanta in 2004 and has spent his career in medical technology working with various startups.

Inspired by Mr. Muhovic’s story as a refugee, Ms. Daniels decided to volunteer for the International Rescue Committee as a civics teacher. She is also the author of a civic preparation handbook.

“Having been lucky enough to be born in Panama City and a country not ravaged by war, I knew nothing about Bosnian history,” she said. That changed when she met Mr. Muhovic. “The turning point is when you understand that refugees are families like ours,” she said. “It tore my heart apart. Once you know better, it’s hard not to do better.”

She also created the charity Citizenship Giveback which supports the IRC’s mission of “helping refugees, asylum seekers, victims of human trafficking, victims of torture, and other immigrants thrive in America after leaving their homes to avoid war, religious and political persecution, or natural disaster,” according to its website.

Ms. Daniels traveled to Bosnia with Mr. Muhovic for the first time in 2019. “He’s never taken a girl home before,” she said. Before returning in 2022, Ms. Daniels took Bosnian language lessons via Zoom with a woman in Sarajevo.

“Being able to speak Bosnian with his extended family while sitting at a table in the yard of his grandmother’s house, where his mother was literally born, was a huge milestone for us,” she said.

Mr. Muhovic was equally determined to win over Mrs. Daniels’ family: her father, Dan Daniels, likes cars, and Mr. Muhovic was determined to impress him by repairing Mrs. Daniels’ 1999 Toyota 4Runner. He took out the engine on seven separate occasions before finally enrolling in YouTube People’s University to learn about cars. He eventually fixed the vehicle and they were able to sell the car for $7,000 with over 330,000 miles on it. “My dad is still impressed,” said Mrs. Daniels.

The couple discussed the wedding for a long time.

“I never really wanted to get married,” Ms Daniels said. “I thought it would be so romantic to get married in court, just the two of us. That has always been my plan.”

Earlier this year, the couple drove through the mountains and started “an active, thoughtful conversation about our future,” Daniels said.

Over the last few years, the couple started a tradition of traveling to Art Basel in Miami Beach, Florida. While chatting while driving, Mrs. Daniels and Mr. Muhovic pieced together their perfect wedding.

Some of Mr. Pierce’s works were born out of loss. “I was experimenting with painting smiley faces at the time, and my mom needed me to fly to the Philippines with her,” said Pierce. When she died on the flight when they landed in Hong Kong, he found himself in the city, distraught with grief. So he stepped in, and this week thousands of graffiti graffiti faces popped up all over Hong Kong.

“It was my way of hiding my sadness,” he said. “But I started to realize that when people noticed my art, it helped a lot of other people.”

After returning from Hong Kong, Pierce began painting his faces all over Los Angeles. He named the project Seeds of Happiness to reflect his hope of spreading bubbles of positivity through art.

When she learned that Mr. Pierce would be shown at Art Basel, the couple contacted and asked Mr. Pierce a question he had never come across.

“Will you marry us at Art Basel?”

In front of 30 or 40 passers-by, Mr. Pierce, who had been ordained by American Life Ministries a few days earlier, officiated the wedding of Mrs. Daniels and Mr. Muhovic in front of his Seeds of Happiness at the SCOPE art exhibit.

There was no family or friends – just what Mrs. Daniels and Mr. Muhovic wanted.

“Most weddings are about friends and family – it really should be about the bride and groom,” she said. “It was perfect for us.”

“There’s nothing traditional about us,” said Muhovic. “It suited us very well.”

The couple was getting ready together at Airbnb in South Beach; Ms Daniels did her own hair and makeup, wearing a nude dress she had rented for the occasion, along with a transparent beachwear. For the first time, they put on engagement rings, drank champagne, ate cheese boards, and threw a ball to their dog Cosmo.

They arrived at SCOPE a little before 3:33 p.m. – and confusion began to build as observers began to realize that something extraordinary was happening.

“All eyes were on us, but honestly, I couldn’t hear anything except where we were,” said Muhovic. “It felt like an isolated, soundproofed area. I was so focused on Kelly. It was such a surreal feeling that even in a large group of people it felt like me and her for that moment.”

“I love my boo’s sense of humor, laughter and your caring nature,” Mr. Muhovic reads in his vows. “I promise I will love you and take care of you in good and bad times.”

“I honestly can’t believe it’s my life to find a partner as kind, dependable, hilarious and caring, yet as gentle as you – and handsome as hell,” reads Ms. Daniels. “During these almost 12 years, you gave me strength, believed in me and treated me as an equal. I am convinced that there is no better man on Earth than you.

Mr. Paintz then said: “With the power given to me by the website, I now pronounce you husband and wife. You may kiss the bride.” Mr. Muhovic obliged.

Lucky numbers Mr. Muhovic chose 3:33 p.m. as the wedding time because he believed three was a lucky number.

Honeymoon party Ms Daniels said no friend or family knew about the wedding until days before. The couple’s parents were delighted. Two of their closest friends, their unofficial bridesmaid, Mary Chamberlain Iocovozzi, and best man, Vince Velazquez, arrived the next day to celebrate with the couple.

Immortalized in Blockchain The couple “minted” their marriage vows, marriage license and key photos of the occasion as non-fungible tokens on the Flow blockchain, along with Mr. Pierce’s work.