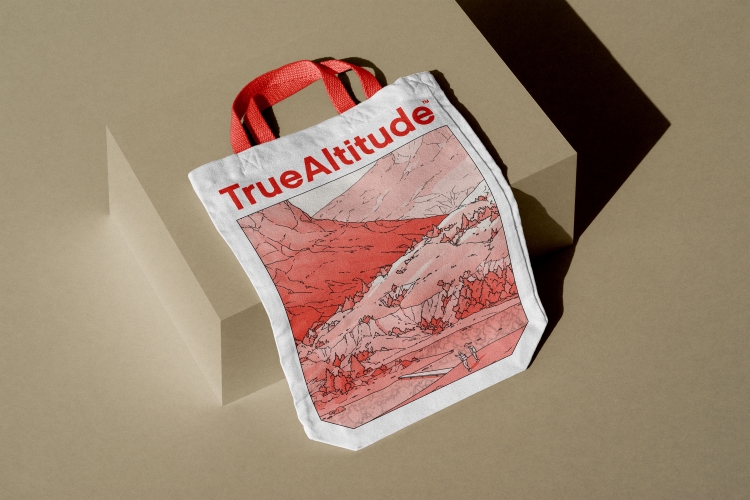 True Altitude invests in tech start-ups to help them grow and scale up. He describes his customer approach as practical and “leather in the game”, which is an important part of the brand’s identity, according to Studio Morfar founder and creative director Torsten Power.

Although True Altitude mainly works with tech and finance start-ups, Power says the studio wanted to move away from the “film blue and green websites with 3D graphics of rocket launches or photos of businessmen shaking hands” usually associated with fintech brands. Instead, the identity was bolstered by graphics of a mountain scene that “represents an uphill battle building a start-up,” according to a studio created by British illustrator Liam Cobb.

Cobb is responsible for the illustrations for the American Netflix animated series Midnight Gospel, which is about a “space thrower” – like a podcaster who travels between self-imagined universes to interview his guests. Power says he sought out Cobb after watching the show because he thought his “psychedelic, surreal style” would help make True Altitude stand out in the marketplace.

Studio Morfar had to consider that the majority of the audience was “older users from more corporate backgrounds,” says Power, so the team was aware that they wouldn’t alienate anyone by “pushing it in a too crazy direction.” He adds that while Cobb’s style is “beautifully unique” and somewhat futuristic, it is also “oddly similar to an old Japanese woodcut style”, giving True Altitude’s identity a “nostalgic” familiarity.

The new logo loosely echoes Cobb’s illustration of a “minimalist stamp-like depiction” of the mountain, says Power. Studio Morfar decided that the existing logotype – which they had designed earlier – was too abstract. Feedback indicated that some people didn’t understand what it was, so a more literal redesign route was adopted.

The studio opted for warmth when it came to True Altitude’s color palette, choosing an off-white color instead of bright white as the background color, according to Power. Other colors used in identification include black for readability, and a “warm shade of red” that Cobb used as a “highlight shade” in the illustrations.

For the headlines and primary copy, Studio Morfar chose Colophon Foundry’s Grenette Pro, which Power describes as “a porridge of gold-haired quirky but serious enough typefaces for corporate eyes.” Poppins by Indian Type Foundry was chosen for its readability for use in paragraphs, buttons, and annotations.

Studio Morfar also designed True Altitude’s website with a focus on keeping everything “super clear, simple and crisp,” says Power. He adds that there are also occasional “elements of wonder”, such as “a beautifully animated parallax effect on the hero mountains” that moves with the cursor. For corporate users who are used to text documents, emails and spreadsheets, Power describes the website as “a visual respite designed for fun”.

Power says agencies and freelancers “often aren’t interested in working with more corporate firms” because they feel there are fewer opportunities for creativity. On the contrary, he believes that “constraints and a good challenge consistently lead to better creations.”

True Altitude’s new identity has been featured on the website, stationery, apparel, social media, and advertisements.