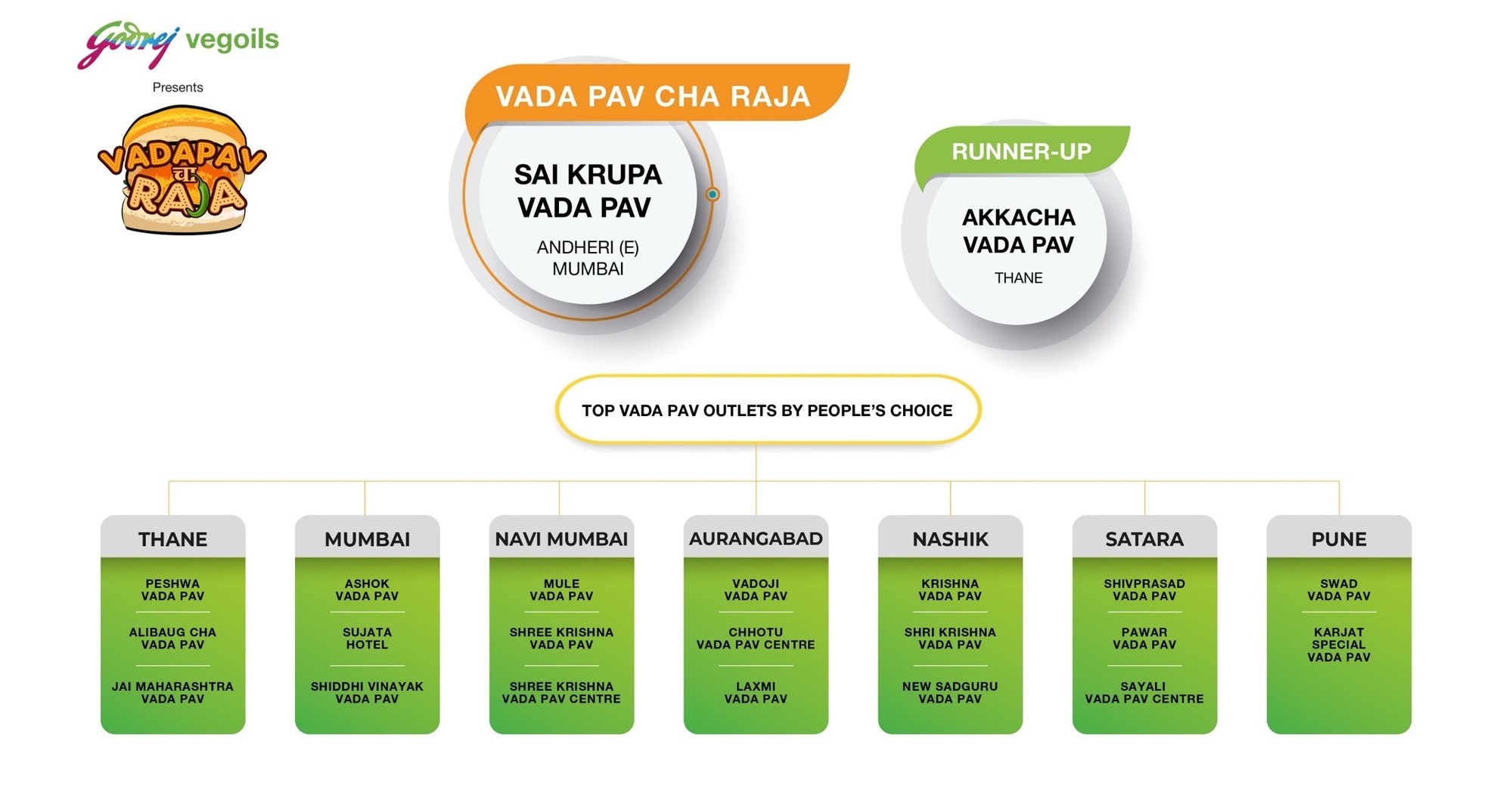 Winners were chosen based on customer popular vote

MUMBAI, India, June 1, 2022 /PRNewswire/ — Vada pav represents the rich cultural heritage of Maharashtra and is a comfort food for people across the country. Godrej Veg Oils, a popular edible oil brand of Godrej Industries Limited, launched a unique pilot initiative across seven cities in Maharashtra to identify the best vada pav outlets based on people’s choice. Maharashtra Tourism has partnered with Godrej Veg Oils to extend this campaign.

The ‘Vada Pav Cha Raja’ initiative was held across MumbaiThane, Aurangabad, Pune, Navi Mumbai, Nashik and Satara. Voting QR codes have been installed at nearly 250 outlets in these cities. Consumers voted at each location based on taste and satisfaction. The campaign recorded an extremely high level of public participation.

MumbaiSai Krupa Vada Pav of Andheri based vada pav outlet was declared as “Vada Pav Cha Raja” based on the votes they received from their customers. Runner up was Thane’s Akkacha Vada Pav. In addition to the top two winners, 20 outlets from seven cities were recognized as part of the People’s Choice Awards for garnering the highest votes in each city.

Nitin NabarCEO & Chairman, Godrej Industries Limited, said, “I would like to congratulate all the winners for the love showered on them by their customers. Godrej Vegetable Oils are known for their focus on taste, purity, quality and variety of edible oils and the larger objective of this campaign is to encourage vada institutions pav to use pure, unblemished and quality branded oil so that people don’t just get the the best taste, but even better food quality.”

Popular film actor Bhau Kadam said, “It was a pleasure to represent Godrej Veg Oils and it was fun to meet vada pav owners from all over the country. I am amazed to see the versatile range of edible oils like sunflower oil, rice bran oil, filtered groundnut oil, refined groundnut oil and refined soybean oil offered by Godrej Veg Oils.Vada pav is loved by common people as well as celebrities and apart from talking about the country’s love for vada pav, this initiative was a reminder to all vada pav outlet owners to use high quality vegetable oils every day while cooking for the people of Maharashtra.”

Speaking on the occasion, Milind BorikarDirector, Directorate of Tourism (Maharashtra)said, “Maharashtra Tourism is delighted to associate with the ‘Vada Pav Cha Raja’ initiative organized by Godrej Veg Oils. Vada pav is one of the most popular delicious snacks in Maharashtra, especially in Mumbai. A travel experience in Maharashtra is incomplete without trying vada pav which is available in countless food shops across Maharashtra. This ‘Vada Pav Cha Raja’ initiative will encourage more and more vada pav makers to come forward and celebrate this delicious snack that has become an integral part of the country’s culinary journey.”

As part of the initiative, Godrej Veg Oils will distribute a total of 5001 vada pavs exclusively made by ‘Vada Pav Cha Raja’ Sai Krupa Vada Pav to various communities. Vada pav will be given of Mumbai dabbawala community and organization without funds Robin Hood’s Army to distribute among the necessary.

Commenting on the same Ritesh AndreSpokesperson, Mumbai Dabbawalahe said, “We dabbawala‘s, have ensured that people always receive food on time. It’s such a nice gesture to see an initiative taking care of the dabbawalas and making sure we don’t go hungry. By crowning ‘Vada Pav Cha Raja’, we appreciate an initiative that not only celebrates our regional snack but also has a direct touch with the community.”

Godrej Veg Oils is a brand of Godrej Industries Limited. Since 1994, when we acquired the VEGOILS production facility, the brand has been constantly striving to provide its customers with the best vegetable oils, both in terms of quality and taste. With a state-of-the-art laboratory manned by highly qualified and experienced chemists, the brand goes out of its way to provide only the best quality products to its consumers.

The facility has a state-of-the-art 100 TDP continuous edible oil refinery set up by Westfallia Germany and Desmet Chemfood Belgium. Precision packing is done by the latest packing machines and net weight filler imported from SERAC France. The facility is Kosher certified and has an ISO 22000-2005 certificate from the competent authorities.