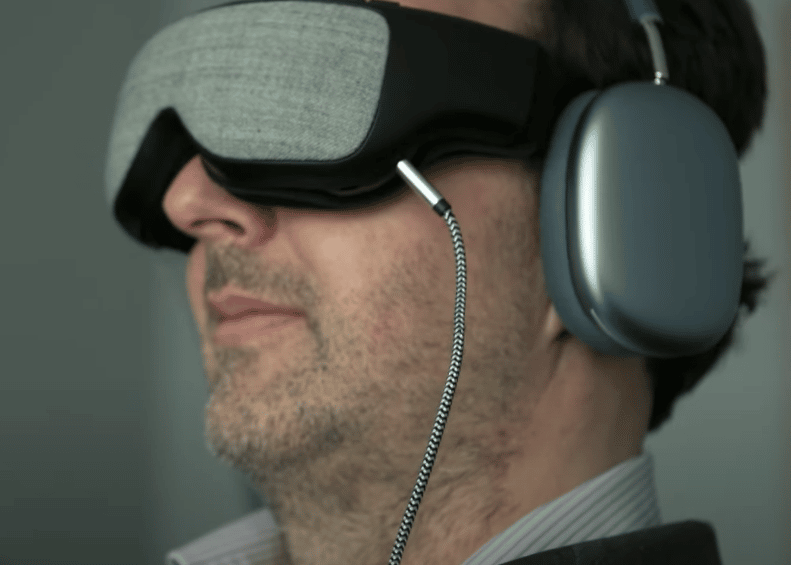 LOUISVILLE – He had a choice, crossing a bridge in Yemen where he was learning Arabic.

Hit a truck head-on or drive off a bridge.

He chose the latter, suffered a spinal injury, permanently lost the use of his legs, and entered a period of severe nerve pain that changed everything.

It was 1992. British-born Richard Hanbury, who has called Louisville his home since 2016, overcame all odds. He was given a five-year life expectancy. He began to think about how to ease his pain and developed a technology that brought him relief. He then went on a “30-year mission to hand it over to other people.”

Its medical history is part and parcel of the development of the technology that is now in the hands of the U.S. Food and Drug Administration for consideration as a pain treatment for fibromyalgia sufferers.

“At the hospital, they gave me the idea of ​​meditation [to alleviate pain]. The problem is that if you’re already in pain or anxiety, meditation doesn’t necessarily work. Opioids take away consciousness. Meditation gives you more awareness.”

The state of flow can be described as being “in the zone”, experiencing a sense of connection and focus of mind and body.

“I began to investigate what this state of consciousness does. If I had meditated all my life, I could have accessed those states I had experienced before. This was my first brain idea. I looked at 50 years of Western research on how long-term meditation changes the mind.”

He came across the research of the British scientist Maxwell Cade, who was studying the relationship between the mind and the body. The “awakened mind” was how Hanbury described him.

Hanbury postulated that if he could change the way his mind worked, he could free himself from pain.

He used tools developed by Cade to track brain activity, and through trial and error, he applied audio-visual stimulation—pulses of light and pulses of sound—and found relief. He said modern medicine could use a large magnet to induce changes in the brain, but this treatment is not available for home use due to the size of the magnet and can be expensive.

His invention, called the Sana Device, achieves the same result at home because a person can use it several times a day for short periods of time.

The word “Sana” is partly derived from the name of Yemen’s capital, Sana’a. Sana means “brightness” in Arabic. It means “healthy” in Latin.

“In almost every language, this word has a healthy meaning,” Hanbury said.

Although the beginnings of Sana Health Inc. dating back to 1993, the rise of wearable technology in recent years has given new life to his efforts to monetize and scale the company.

Brexit – Britain’s exit from the European Union – has spoiled the work due to the uncertainty that has resulted for medical device developers. Hanbury packed up and moved to San Francisco.

He hired an COO who suggested that moving to Colorado would help the company recruit the people it would need to bring its product to market. Louisville became his home, and Meddux Development Corp. LLC in Boulder became its contract manufacturer.

Hanbury has 23 employees in Louisville and expects growth as the company receives FDA approval for its product.

Hanbury markets the Sana device as a wellness device, but expects FDA approval to accelerate the company’s growth.

His device is now under consideration by the FDA for treatment of fibromyalgia pain, and he hopes to make a decision in the first quarter of 2023. When that happens, he will seek approval to use the device for neuropathic pain, and then for post-traumatic stress disorder.

Although it has sold about 2,000 units as a wellness device, FDA approval will open the door for users to reimburse insurance and thus expand the market.

And the market is huge.

“Opioids don’t work for long-term chronic pain,” he said. “The benefit-risk ratio changes after about five days. One in four Americans takes a psychoactive substance every day [legal or illegal.] If you took all the mental health professionals in the country and made them work at 95% efficiency, you could reach about 6% of the population,” Hanbury said.

He said the treatment gap could be filled with tools like the Sana device, and when used in conjunction with other treatments could “make everything else work better.”

The company attracted the attention of investors. He said Sana Health raised $23 million in three rounds of fundraising.

It has attracted the attention of organizations that recognize the latest technologies. He recently received a $100,000 award from the Otto Awards which recognized Sana’s origin story.

This year, the company also received a homeland security grant and a U.S. Department of Defense grant for pain and sleep research at Brooke Army Medical Center in Texas. Last year, the company received an FDA grant to research post-traumatic stress disorder as a potentially groundbreaking device. The Sana device is available on a subscription basis, subject to the terms and conditions set out at company website. The 18-month plan for $99/month results in owning the device.